Skiathos is a cosmopolitan island in the North Aegean. It is characterized by its rich vegetation, its blue waters and its beautiful beaches.
The "Diamond of the Aegean", as it is often called, perfectly combines its beautiful natural ornaments, island architecture, hospitality of residents as well as intense nightlife.

The picturesque town of Skiathos is the only settlement on the island, a modern holiday resort with excellent tourist infrastructure and a strong cosmopolitan character. Walking through the settlement, guests are enchanted by the paved footpaths, the whitewashed tiled houses, the picturesque harbor and the beautiful Bourtzi.

The most important sights of the city 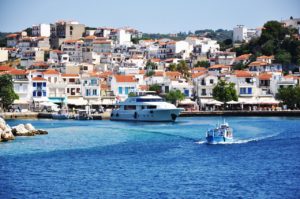 With more than 60 sandy beaches and crystal blue waters, or Skiathos is one of the most popular destinations in the Sporades.

Lalaria Beach is one of the most beautiful beaches in Greece. The beach is named after the full round white pebbles, the so-called "lakes", which cover the entire beach. The "Trypia Petra", a rare geological phenomenon, is a landmark

How to get there:

COVID-19 Update
Our Commitment during Covid-19